Sophia Lakhdar, Director of Sherpa, will join on 5 June 2014 the round table “Which model of environmental justice for an ecological transition?” organised by the University of La Rochelle as part of a multidisciplinary symposium “From the exploitation of natural resources to ecosystemic services: the issue of ecological solidarity”, which will take place on 5 and 6 June 2014.

>There is no official definition of the concept of ecological debt, but a definition elaborated by the Ecuadorean NGO Accion Ecologica is often cited. It reads as follows: “the responsibility of industrialised countries for the gradual destruction of the planet as a result of their production and consumption methods and of the characteristics of this development model, furthered by globalisation and threatening sovereignty”.

The concept of ecological debt raises fundamental ethical questions as to natural resources management and the distribution of the costs and profits of development and industrialization processes. It invites philosophical, political, economic and ecological reflection as, up to now, there is still no global theory of ecological debt. Which scientific realities correspond to this political slogan? Which tools and concepts have been developed to understand the ecological debt?

The round table “Which model of environmental justice for an ecological transition?” is open to the public, subject to availability.

For more information, visit the dedicated page on the University of La Rochelle website. 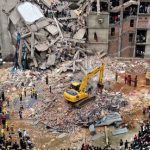 Next Story
Rana Plaza factory collapse: A preliminary investigation is being launched after a complaint has been filed against Auchan
↑
Close