The Rana Plaza collapsed on 24 April 2013. The building, which was occupied by several textile workshops involved in the manufacture of clothes for European and American brands, caused more than 1,100 deaths in Bangladesh. This drama is one of the worst industrial disasters of our century. But it highlighted a state of affairs and a situation concerning the textile slave workers in Bangladesh who manufacture clothes for famous textile and distribution brands names, mostly French. Labels with the brand names used by leading retailers, including the AUCHAN group, were found in the debris.

In January 2015, the complaint for «misleading commercial practices» initiated by Sherpa and its partners against Labels of the In extenso brand , a clothes brand belonging to Auchan, found in the debris

Auchan for the Rana Plaza drama was dismissed. After a mission in December 2014 to gather evidence in the official Auchan factories in Dhaka, Bangladesh, Sherpa took the decision to file a complaint with civil party petition against Auchan.

The grounds of «misleading commercial practices» is innovative because it allows us to circumvent existing legal obstacles in terms of the liability of multinationals and thus to require them to respect human rights along their chain of production, at least when they claim to do so in their ethical commitments.

This procedure with civil party petition gives access to an examining magistrate; the association can thus participate in the investigation and provide evidence throughout the inquiry. This enabled Sherpa to provide the judge with many of the elements of its investigation in Bangladesh, and thus prove that violations of workers’ rights persist among the brand’s official subcontractors.

In the preliminary investigation report conducted by the office of the prosecutor, Auchan justified itself by the fact that it could not know that one of its subcontractors was manufacturing its order at the Rana Plaza. Sherpa then sent an analysis of the report of the investigation in June through a civil party petition, showing that Auchan should have
known. Moreover, in October, Sherpa sent a note to the judge summarizing all the elements brought from the factories in Bangladesh, demonstrating that even if Auchan claimed to be unaware for the Rana Plaza, in any case it could not ignore the serious violations that persist in its current official plants.

The grounds of «misleading commercial practices» should give more binding value not only to the ethical standards of groups, but also more generally to the standards of soft law (OECD Guidelines, UN Guiding Principles, etc.), when companies claim to respect these texts. However, the use of these grounds in the context of the relationship between subcontracting companies and subcontractors, and not the parent-subsidiary relationship, shows that it is necessary to hold businesses liable for the serious damage which may be caused by their suppliers or subcontractors abroad.

The complaint with civil party petition filed by Sherpa against AUCHAN registered on June 10, 2015 and a documentary on Arte entitled «Fashion kills», broadcast on October 20, 2015, which follows
Sherpa during its investigation in Bangladesh, have helped to raise the awareness of the public on the dangerous working conditions of workers in Bangladesh and in the textile industry in general. This complaint was also decisive during the vote on the duty of care bill, because it helped to relaunch the debate on the liability of parent companies
over their subsidiaries and subcontractors abroad. Moreover, the evidence collected by Sherpa fed the investigation and complemented the work of the Public Prosecutor, who does not always have the political will nor the financial means to conduct thorough investigations abroad in cases involving large multinationals. Thus, the expertise of Sherpa in the domain helped to improve the victims’ access to justice, who most of the time have neither the
expertise nor the means to provide the evidence.

26 May 2014 – Opening of a preliminary investigation

22 August 2014 – Auchan announced its contribution of 1.13 million euros to the compensation fund for the Rana Plaza victims

January 7, 2015 – The complaint was dismissed without further action.

October 20, 2015 – Submission of a note of analysis on the investigation report; the documentary «Fashion kills» was broadcast on Arte. 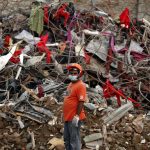 Next Story
Extractive industries: How far will France dare to go to ensure transparency?
↑
Close