Point of View published in the French newspaper Ouest-france

By February 2 at the latest, the Prime Minister will decide on the ministerial certification of Anticor. “A look back at the role of certified associations in the fight against corruption since their creation” By Patrick Lefas, President of Transparcency International France, Franceline Lepany, President of Sherpa, and Elise Van Beneden, President of Anticor.

Without Anticor, there would have been no case of the so called “pools of the Elysée”: a prosecutor would never have investigated the abuses of the former French president throughout his mandate. Without Transparency International France and Sherpa, there would be no case of “ill-gotten gains”.

Since the creation of a specific anti-corruption certification by the legislator in 2013, that allows NGOs to bring civil action in corruption cases, the certified anti-corruption associations have brought citizens into the courtroom and open the matter to public debate. By their central role in the fight against corruption and by being the privileged witnesses of the weakness of the State in sensitive cases, anti-corruption associations act as a powerful relay of citizens vigilance. They fight for ethics in the public sphere, for transparency and against economic crimes. They tackle illicit financial flows in a globalised world. They campaign and advocate to ensure that companies respect their social and environmental responsibility and legal obligations. Their actions open up new possibilities.

These associations are also laboratories of law acting as critical forums for democracy. Through the legal groundbreaking innovations they promote, they engage strategic litigation supporting their political advocacy on concrete legal changes. By exposing the gaps and inadequacies of the law, they contribute to making it fairer. They are key instruments of social transformation, influencing the development f the law, building a new narrative for a fairer world, fighting for the effectiveness of fundamental rights at the local and national level and in a global perspective.

NGOs play a crucial role in the democracy, which undoubtedly leaves room for improvements. They bring together many citizens mobilised in a great battle against the culture of impunity, which erodes the legal framework and undermines the morale of citizens day after day. They develop expertise to play an active role in national and international affairs. Without them, many sensitive cases would never have been brought to justice. Complaints and, where appropriate, civil party constitutions act as an orientation and a driving force to public prosecutors’ offices that are unevenly disposed to deal with sensitive cases. They steer justice in fields that have been largely neglected in the past. They can act as a barrier to these major dysfunctions.

The advocacy of associations to change laws and rebalance institutions is bearing fruits. The Sapin 2 law enshrined the legitimacy of whistleblowers and the battle remains on our agenda to obtain an ambitious transposition of the directive. The law also imposed a duty of vigilance on parent companies for the actions of their subsidiaries and subcontractors.

Finally, these associations are waging a cultural battle. They organise universities, conferences and public debates. They unite through common structures such as the “PPFJ” the Platform against tax and legal havens or the “MLA”, gathering NGO’s to endure effective protection for whistleblowers and promote better standards.

But they also have an Achilles’ heel. By granting associations the right to act in defense of a collective interest, the legislator has also entrusted the power of granting the above-mentioned certification to the ministry of justice. However, by their very nature, these associations can irritate or even indispose the Governments. Furthermore, this certification must be renewed every three years. While Transparency International France’s certification was issued on time, Sherpa had encountered many obstacles to have its certification renewed. Anticor’s certification is now in the hands of the Prime Minister. The latter must demonstrate democratic integrity, and loyally respect what the legislator intended, and acting with the full force of the Republic’s laws. The Prime Minister cannot give in to the temptation to hinder the fight against financial crime.

Previous Story
Strengthening Corporate Accountability: Toward an Ambitious European Legislation on the Duty of Vigilance
→ 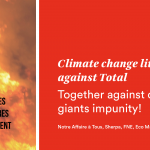 Next Story
Climate change litigation against Total: a first victory for the NGOs and local authorities
↑
Close