MERCURY – French Guiana: A failure of the French government 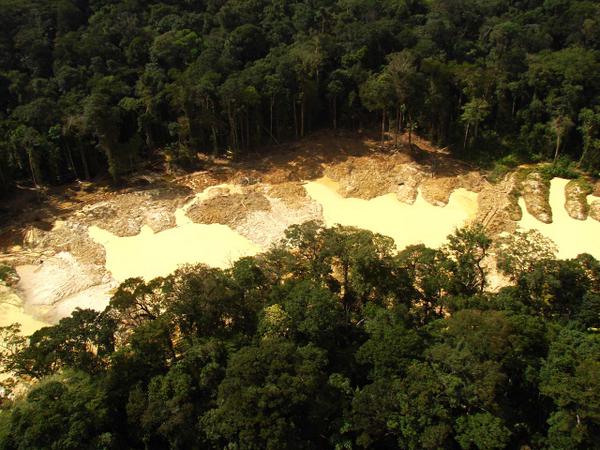 For the past several decades, French Guiana has been the victim of illegal gold mining practices. The use of environmentally unsafe processes, particularly excessive mercury use, is a veritable catastrophe with regards to the environment (e.g., contaminated water and soil), public health (e.g., cardiovascular problems) and society (e.g., violence stemming from illegal miners). Practically inexistent oversight by the local authorities has continued, despite numerous warnings through civil petitions and a 2001 complaint lodged with the regional court of Cayenne.

In 2008, a group of salaried employees from Sherpa travelled to French Guiana to gather information and witness testimony from locals directly affected by the consequences of gold mining. The exploratory mission showed the damage caused by this illegal practice and will serve as a reference document in preparation of a liability case against the French government. The impact on the health of local residents, especially on the Wayana and Emerillon peoples, is especially troubling; it has been the subject of numerous studies and has been recognised as a very real issue.

Local residents also show high levels of mercury in hair samples taken, which proves abnormally high levels in the environment. In addition to causing cardiovascular diseases, overexposure to mercury can also lead to neurobiological disorders to which growing foetuses and young children are particularly sensitive.

A failure of the French government

This is why various associations which have been able to gather the necessary information to put together a case filed a complaint against the French government on 11 December 2013 for its failure to take action. The complaint was lodged with the Cayenne prefect under the jurisdiction of the Administrative Tribunal of Cayenne by the Solidarité Guyane association and the Nations Autochtones organisation.

The aim is to show the failure on the part of the French government to take the necessary measures to ensure gold mining regulations and laws were followed in French Guiana. The French government’s inaction has harmed local populations and the environment, for which compensation for damages and interest is sought.

Following the lodging of the complaint, French Minister of Justice Christiane Taubira addressed a letter dated 30 December 2013 to our partner associations assuring us that the government was endeavouring to resolve the violations.

This case constitutes progress regarding one of the causes for which Sherpa advocates with regards to the failure of the French government to fulfil its obligations to populations it should be protecting.

11 December 2013: Preliminary complaint filed against the French government for the administration’s failure to take action, lodged with the Cayenne prefect by the Association Solidarité Guyane (ASG) and the Organisation des Nations Autochtones (ONA), drafted by the law offices of Bourdon & Forestier.

22 April 2014: Full complaint lodged with the Administrative Tribunal of Cayenne.