Paris, 7 November 2019 – Today, the Investigation Chamber of the Paris Court of Appeals revoked the indictment of French company Lafarge for complicity in crimes against humanity committed in Syria and Iraq – in particular by the “Islamic State” (IS). However, the judges upheld the indictment of the French multinational for deliberately endangering the lives of others, financing terrorism and violating a trade embargo. Charges remain against eight former executives.

Furthermore, on October 24, the Chamber had rejected Sherpa and ECCHR’s admissibility as civil parties, both organizations will appeal to the Supreme Court. As a result, today, the Court rejected the admissibility of all the legal briefs submitted in this appeal by the organizations.

The nonprofit organizations Sherpa and the European Center for Constitutional and Human Rights (ECCHR), who filed the complaint against the company and its executives in November 2016 with 11 Syrian former Lafarge employees, will appeal at the French Supreme Court.

“Lafarge didn’t just endanger my life and those of my colleagues,” said a former Syrian Lafarge employee and plaintiff in the case. “By doing business with armed groups in the region, they took the risk to contribute to crimes against humanity. This has to be investigated. I’m confident that the French authorities will re-consider this charge.”

For Sandra Cossart, Sherpa’s Executive Director, “the Lafarge/Syria case remains the first in France to lead to criminal investigations into a company’s liability for activities abroad.” But “by refusing to confirm the charge against Lafarge of complicity in crimes against humanity, the Investigation Chamber is impeding the fight against the impunity of multinationals that operate in areas of armed conflict – depriving those affected by these conflicts from accessing justice,” said Marie-Laure Guislain, Head of litigation at Sherpa.

The charge of complicity in crimes against humanity was one of the main allegations in Sherpa and ECCHR’s initial complaint. In May 2018, the nonprofit organizations filed a submission with the investigating judges underlining Lafarge’s complicity in IS crimes. The company was indicted on these grounds in June 2018, the first such indictment worldwide.

Investigative bodies of the United Nations and extensive additional evidence confirm that the crimes IS committed in Syria and Iraq do classify as crimes against humanity.

“Serious and consistent evidence indicates Lafarge’s complicity in these crimes – mainly by funding IS and other armed groups with several million euros. It is the company’s financial powers that were presumably mobilized for such payments, in the interest of Lafarge’s strategic profit to remain active in Syria. It is therefore for the company to answer such allegations before the courts.” added Claire Tixeire, Senior Legal Advisor at ECCHR. “Multinational companies’ responsibility goes beyond the doors of their headquarters.”

The charges of deliberately endangering the lives of others, financing terrorism and violating a trade embargo are maintained by the Chamber against Lafarge, as well as the indictment of the former executives, which makes this case a milestone in the fight against impunity. 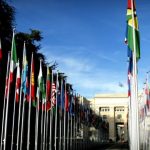