LAW PROPOSAL ON « ILL GOTTEN GAINS »: an essential tool for the fight against international corruption

Today the French Senate examines Senator Jean-Pierre Sueur’s law proposal on the return to the country of origin of assets resulting from transnational bribery and corruption. Sherpa stresses out the importance of the adoption of such law in France which hosts some of these illegaly aquired assets.

Sherpa welcomes this initiative and recalls that it is crucial that France adopts a clear scheme for the restitution of the proceeds of corruption to the victim countries, all the more so due to the fact that thoses primeraly affected are almost exclusively developing countries. This highlights an organized system of personal enrichment to the benefit of African leaders and their entourage, through a massive diversion of public funds.

For many years, Sherpa with Transparency International France have initiated  many legal proceedings including the first three complaints filed in 2007. These cases, known as « ill-gotten gains cases », are based on suspicions of concealment of embezzlement of public funds by the clan of Congolese President Denis SASSOU-NGUESSO, Ali BONGO in Gabon, and the OBIANG family in Equatorial Guinea.

In 2017, the Paris Criminal Court rendered a long awaited judgment with respect to the ill-gotten gains case condemning Theodorin Obiang and ordering the confiscation of all its movable and immovable property seized in Paris. The question of the restitution of these goods to the despoiled population of Equatorial Guinea remains unresolved.

Indeed, measures need to be put in place to ensure confiscated assets would not be allocated to the general state budget of France or returned to the Obiang government in Equatorial Guinea.

The return of illegally aquired assets to the country of origin through the implementation of projects aimed at benefiting the local population is a critically important issue and constitutes a major pillar of the fight against illicit financial flows, especially given the considerable significances of the damages suffered by the victims of these corruption schemes.

The legislative discussion must therefore take into account the need to cooperate with the civil society of country of origin in order to guarantee the safe and transparent return of these assets. Seized funds should beside be used to finance developpement projects in the field of health, education, good governance and, more broadly, to guarantee and strengthen the rule of law. Experience shows that associations, from North and South, should be called upon to ensure the proper administration of restitution.

It is important that the law proposal be welcomed today in order to initiate a reflection on the concrete terms and procedures to be established to ensure a safe and transparent return of ill-gotten assets.

Equatorial Guinea : In 2007, Sherpa https://www.asso-sherpa.org/home, followed by Transparency International France n 2008 launched an unprecedented proceedings on suspicion of concealment of embezzlement of public funds by the clan of Congolese President Denis Sassou-Nguesso, Ali Bongo, and the Obiang family in Equatorial Guinea. At the end of a long legal saga, one of these cases resulted in a long awaited decision (under appeal since October 2017), the decision convicted Teodorin Obiang, son of the President of Equatorial Guinea, to three years’ imprisonment and a 30 million euro fine. The confiscation of his property was also ordered.

Syria : A judicial investigation was opened in 2015 at the initiative of Sherpa against Rifaat El Assad, uncle of Bachar el Assad, who was finally indicted in June 2016. Following this complaint, his assets in France have been seized for a value of 90 million Euros.

Canada : On March 1, 2018, Sherpa asked the Royal Canadian Mounted Police (RCMP) to initiate an investigation on the conditions for the acquisition of a significant Canadian real estates by African leaders and officials of the Republic of Congo, Algeria, Burkina Faso, Gabon, Chad and Senegal who have invested more than 30 million in Canada and for some of them despite being subject to legal proceedings in France. Sherpa and the « BMA Canada » Coalitionfiled an additional complaint against some 20 leaders in seven African countries on 7 June 2018 based on alleged laundering of proceeds of criminal offenses, misappropriation of public funds, misuse of corporate assets, corruption and breach of trust.

Djibouti : Sherpa and the European Collective of the Djiboutian Diaspora (CEDD) filed a complaint on October 16, 2018 for abuse of corporate property, embezzlement of public funds, breach of trust and bribery of foreign public officials against members of the entourage the President of Djibouti, Ismail Omar Guelleh, in power for nineteen years. 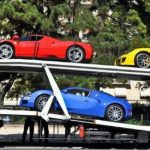 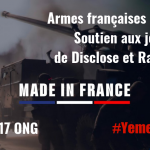